Select an area below or just scroll through the whole page.

Where: Primary access is from Hayfield Road (off of Fairview Loop – 9.6 miles from the Parks Highway junction of Fairview Loop or about 2 miles from the Knik-Goose Bay Road junction with Fairview Loop). Follow Hayfield Road for about 1.3 miles, where you will see the Lucy Lake Road on the right and an unnamed road on the left. There is a sign on the right designating the unnamed road as the public access for the Hay Flats. Take that road for about 0.4 miles down to the Hay Flats. The road is gravel and often very bumpy and in spring you may need 4wd to safely use the road.

What: This estuary is one of the most productive waterfowl stopover and nesting areas accessible in south central Alaska. During migration, the Hay Flats are an important migratory stopover for large numbers of ducks, geese, swans and Sandhill Cranes. Shorebirds are also very common during migration. A variety of raptors such as Northern Harrier, Rough- legged Hawk and Short-eared Owl can be seen regularly during migration with some nesting as well. Warblers, sparrows, longspurs, thrushes and other songbirds also frequent the area. Some species that occur in the Hay Flats have special conservation status including Trumpeter Swan and Rusty Blackbird. The Refuge was nominated as an Important Bird Area (IBA) by International BirdLife and National Audubon Society. A very rare Sora Rail was observed for a few consecutive years the spring. Note: Knee boots or hip waders are often necessary if you proceed onto the Flats. The Alaska Department of Fish and Game and a citizen’s group, Alaskans for Palmer Hay Flats www.palmerhayflats.org] are working to clean up the Hay Flats.

Where: Follow the Old Glenn Highway (E. Arctic Ave.) from Palmer across the Matanuska River to Maud Road (2.5 miles after crossing the river). Turn left onto Maud and travel about 2 miles to where the road becomes unpaved and rough. Continue about 2.5 more miles and turn into the large Mud Lake parking area on the right. Mud Lake is a short walk down the hill. NOTE: The Mud Lake parking area belongs to the Alaska Native corporation, Eklutna, Inc. Eklutna, Inc. requires that all members of the public who are not Eklutna, Inc. members, must have a permit issued by Eklutna, Inc. in order to use the Mud Lake parking area, or to bird from that parking area. The permit must be displayed in your parked car.  Although Eklutna, Inc. offices are located in Eagle River, you can obtain a permit using email.  To obtain a land permit form, email your request to info@eklutnainc.com .  Completed permit form and proof of valid and current medical insurance and photo ID required. For more information go to https://www.eklutnainc.com/  telephone number 907-696-2828.

From the Mud Lake parking area, if you drive another 1.5 miles on Maud Road, you will come to the end of the extended portion of Maud Road. A short rough road leads to the right down to Jim Lake. There are canoe and small boat launch sites at both Jim and Mud Lakes, so birders can bird by boat throughout the wetlands. Also at the end of Maud Road (extended) there is a woodland trail to the southeast called the Rippy Trail, and it runs parallel to the wetlands. This trail offers woodland birding and views of the swamp, alpine meadows and cliffs and the Knik Glacier. Be aware that there is a shooting range just off of Maud Road (extended), about half way between Mud Lake and Jim Lake, so expect to hear gunfire, especially in the afternoons.

What: A diverse area of interconnected lakes, bogs, anadromous streams, wooded uplands and alpine habitat on the north side of the Knik River. Drainage off the south facing slope warms the wetlands and often provides the only ice- free staging area for early arriving and late departing swans. The area provides nesting and/or migratory staging habitat for over 20 species of waterfowl, a wide variety of woodland and swamp songbirds, upland game birds, and raptors. Shorebirds are observed in relatively small numbers. Check the cliffs for Dall Sheep and Golden Eagles.

Species difficult to find in other areas of the borough are reliably found here such as Song Sparrow, Townsend’s Warbler, American Kestrel and Hammond’s Flycatcher. Some species that occur regularly have special conservation status including Trumpeter Swan, Rusty Blackbird, Townsend’s Warbler, Olive-sided Flycatcher, White-winged Crossbill and Blackpoll Warbler. The Jim-Swan area is an Important Bird Area (IBA) of state significance as designated by International BirdLife and National Audubon. Note: Primary landholder is the State of Alaska. Managed by the Alaska Department of Natural Resources as part of the Knik River Public Use Area.

Where:    Glenn Highway roadside from Matanuska Glacier to Eureka Roadhouse.

What: A diverse region that spans two primary life zones – SouthCentral Alaska woodlands/alpine and Interior Alaska taiga forest. An important migration flyway in spring and fall for most landbirds known to occur in SouthCentral and Interior Alaska including songbirds and raptors as well as a good number of swans. Many species of waterfowl, marsh and boreal songbirds, hawks and owls nest here.

The Hawkwatch: Each spring from late March through early May birders gather at the pullouts along the Glenn Highway in the vicinity of Gunsight Mtn (about five miles before reaching the Eureka Road House). Golden Eagles return to the area in late March. Twelve additional raptor species pass through with heaviest flights occurring the last two weeks of April. In March 2006, 220 Golden Eagles were counted in 2.5 hours – a record-setting flight! Observers generally watch every weekend and some week days and total about 100 hours of observation averaging 1200-1500 hundred raptors. Migrants are identified and the data is sent to The Hawk Migration Association of North Association of

Where: Travel west on the Parks Highway from Wasilla. North of Houston at milepost 67.3 turn left at the brown sign for the State Recreation Area onto Nancy Lake Parkway. Bird along the 6.5 mile parkway, on foot trails or by canoe throughout the extensive canoe system. Contact Alaska State Parks for information on trails, boating and public use cabins. The ranger office is at mile 1.3 of the parkway.

What: Primarily wooded rolling terrain, some bog habitat and lots of lakes and ponds. Good for migratory and nesting waterfowl (including Common and Pacific Loon), and woodland songbirds and raptors. Good location to listen for Boreal, Northern Saw-Whet and Great Horned Owls in February and March. Blackpoll Warbler is reliably found here and also other warblers, sparrows, and thrushes. A good place to find Ruffed and Spruce Grouse.

Where: Drive north about a mile from Palmer on the Glenn Highway and turn left on to Palmer Fishhook Road. At 8.6 miles, this road crosses the Little Susitna River and turns into the Hatcher Pass Road.

What: The road follows the gorgeous Little Susitna River in the lowlands for a few miles then rapidly ascends into the alpine. The brushy areas along both sides of the road have warblers, sparrows, thrushes and finches in spring and summer. In spring, the otherwise difficult to find Harlequin Duck is common along the river and in the beaver ponds between the road and the river. American Dipper, Common Merganser can be found in the fast moving streams with a little effort.

White-tailed, Willow and Rock Ptarmigan live throughout this area although not reliably in any one location. For your best chance at seeing ptarmigan, be alert when driving the road, or try hiking Gold Mint Trail, the bowl around Independence Mine, or anywhere along Archangel Road for your best chance. Winter snowshoeing or skiing in these areas are often productive for ptarmigan as well.

Golden Eagles and Gyrfalcons nest in the alpine regions; Merlins at lower elevations. Other difficult to find species that occur in the Hatcher Pass area (in their preferred habitat) include Say’s Phoebe, Gray-cheeked Thrush, Gray-crowned Rosy Finches and Wandering Tattlers. 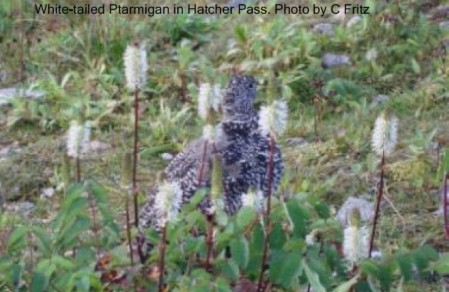 Where: Driving south on the Glenn Highway from Palmer, turn left at mile 36.5 directly across from the Kepler-Bradley State Recreation Area. As you come down the hill from the Glenn Hwy, there is a pullout to the right where you can park. This area was originally occupied by the town of Matanuska. Walking down the road, you cross Spring Creek and a set of railroad tracks. Walk the road and bird the marshy habitat on the left.

What: Much of the original town site is flooded and offers bog, slough, thickets and wooded habitat for nesting and migratory waterfowl, shorebirds, sparrows, warblers, thrushes, swallows and flycatchers. Osprey, Bald Eagle and Harlan’s Red-tailed Hawk are often seen and its a good place to listen for owls in February and March. This is a great place to see Wilson’s Snipe performing their mating ritual flight display known as “winnowing” as stiffened outer tail feathers produce a pulsing whistling sound as they go into steep glides. Bald Eagles, Osprey and Belted Kingfishers are often seen.

Note: The property at the end of the road is private as are the RR tracks. RR employees are strict about enforcing the no-trespass policy.

Where: Traveling east on the Old Glenn Highway in downtown Palmer, before crossing the Matanuska River bridge, turn left into the Park. The park’s woodlands harbor warblers, sparrows, thrushes, flycatchers, ducks in the small woodland stream, and woodpeckers. There are several trails for hiking in the summer (or skiing in the winter) that loop around and behind the park and campground; some trails lead to the river where you may find Bald Eagles, waterfowl (including common merganser) and gulls.

When leaving the Matanuska River Park and returning to Palmer, check the field on the left (south) side of the road just before re-entering Palmer. This field is especially good in the spring and fall for staging geese and Sandhill Cranes. Check any of the open fields in and around the Palmer area for migratory waterfowl.

Where: Traveling from Anchorage on the Glenn Highway, immediately after crossing the Knik River bridge, exit at the Knik River Access off-ramp. Turn left under the overpass then left on the frontage road that proceeds towards the Knik River. The entrance to the lake is blocked by a locked gate that prevents vehicles from entering. The locked gate is scheduled to be replaced by a walkthrough gate. Park by the gate or along the edge of the frontage road. The public is permitted to enter the park by walking around the left end of the fence. Shooting is not permitted.

Note: Reflections Lake is a part of the Palmer Hay Flats State Refuge and has the added benefit of being cared for by the previously mentioned local citizens group, Alaskans for Palmer Hay Flats (www.palmerhayflats.org).

For more information, refer to the American Birding Association’s, “A Birder’s Guide to Alaska” by George C. West. Report Alaska sightings to http://groups.yahoo.com/group/akbirding.

See our “Birding in the Mat-Su” document for places to go, birds to see and directions to get you around our beautiful Mat-Su Valley!

If you have found or harvested a banded bird, please see more info here.  You’ll need the band number, or numbers, if the bird has more than one band. 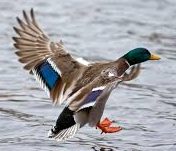